Sometimes I notice a missing negative in a weblog post after I publish. What is worse is when Googlebot grabs the initial, incorrect version that doesn't present what I mean to write. Reader beware, or at least check the website if you think I've written some nonsense.
Posted by John Paul at 8:23 AM No comments:

Email ThisBlogThis!Share to TwitterShare to FacebookShare to Pinterest
Labels: blogging

What I think science is not

I read this article, which is about an interesting model of the universe before and after the Big Bang, or Big Bounce as is the case in the model, and then I read the comments. The comment below struck me as being from someone who does not understand the philosophy of science and who thinks "the scientific community" is supposed to come up with dogma that everyone is supposed to accept. I think it's an easy notion to hold only as long as one does not have a grasp that science should make theories based the evidence, and science is not about making determinations about the physical world from a lack of evidence. It reflects the same desire for certitude whose ridiculousness is exhibited in the "Creationism Museum" to the extent that one is willing even to contradict physical evidence to satisfy this desire: (image from ArsTechnica.com) 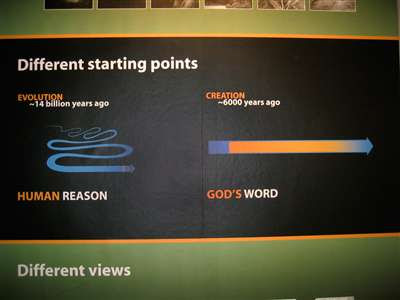 (I assume the Creationism Museum promoters prefer the simple arrow rather than the exaggerated, meandering path of empirical knowledge about the physical world which they apparently confound with human reason only on the "evolution" side and not with any regard to their understanding of "God's word". Whether by malice or ignorance, I think it is a mistake.)

The scientific community is going to have to make up its mind about 'the big bang' theory and black holes. It will have to determine which really exists: big bang, or black holes. As I see it, the two are mutually exclusive and cannot exist in the same universe. If, as postulated, a black hole's gravitational pull is so strong that nothing can escape it, not even light, then the big bang could not possibly have existed, as nothing would have been strong enough to escape it. If the big bang is true, then black holes cannot exist as currently postulated. So, science must make up its mind which one of these theories is valid and which must be discarded as being illogical.

When people hold such notions that science is supposed to provide these absolutes so that their own world-views are neatly packaged and free from uncertainty, it's easy to see why people rebel against what they mistakenly view as a failure of science when they are simply expecting science to be something it is not. There is clearly something, such as a certainty on which to anchor a worldview, many people are looking for, and directing them to science for that is a solution only as stable as the evidence that science uses, and that evidence is likely to change. Science has no problem with these changes, and science leaves gaps where the evidence is not conclusive, but an attempt to force the universe to obey one's myopic view of how the universe is and was and will be is highly quixotic, especially when playing with a God of the Gaps whose gaps are being filled.
Posted by John Paul at 7:25 AM No comments: